Before the invention of the internal combustion engine, nobody knew what to do with the natural petroleum deposits in north America, apart from small-scale use. In the 1840s, western Pennsylvania was a sparsely populated area of forests, farms and creeks, and petroleum was marketed as a curative medicine. Experiments then showed that kerosene (paraffin) could be distilled from petroleum and was suitable for replacing whale oil in lamps. This was such an incredible development in lighting that it led to speculative wells being dug. A further development occurred in 1859 when the first artesian well was successfully drilled at Titusville in Pennsylvania, initially producing 25 barrels (each containing 42 US gallons) of petroleum a day. The news spread like wildfire, and oil mania began.

Petrolia was the overall name given to the region, and in just four years numerous small towns developed, as a special correspondent from The Times reported in October 1864:

‘The mountain tops have been shorn of their forest growth of ages, and in its stead rise cities. Wild, solitary creeks and river inlets … are now roughly bridged, their shores lined with shanty wharves, their waters covered with every kind of nondescript craft that can be got to float, all laden with oil.’

The first settlements were shanty towns, and one was described by the correspondent:

‘Oil City is about 600 miles from New York … All along the last few miles to Oil City the derricks have been becoming thicker and thicker; the incessant walking beam which pumps the oil more and more active; the roads worse; and the painful scenes of overladen teams [of horses] struggling through mud up to their shoulders more and more frequent. The smell of the gas, though at first not very unpleasant, soon gets painfully strong, and at last most decidedly nauseating … Mud and oil, one or the other, or both combined, reign supreme here.’ 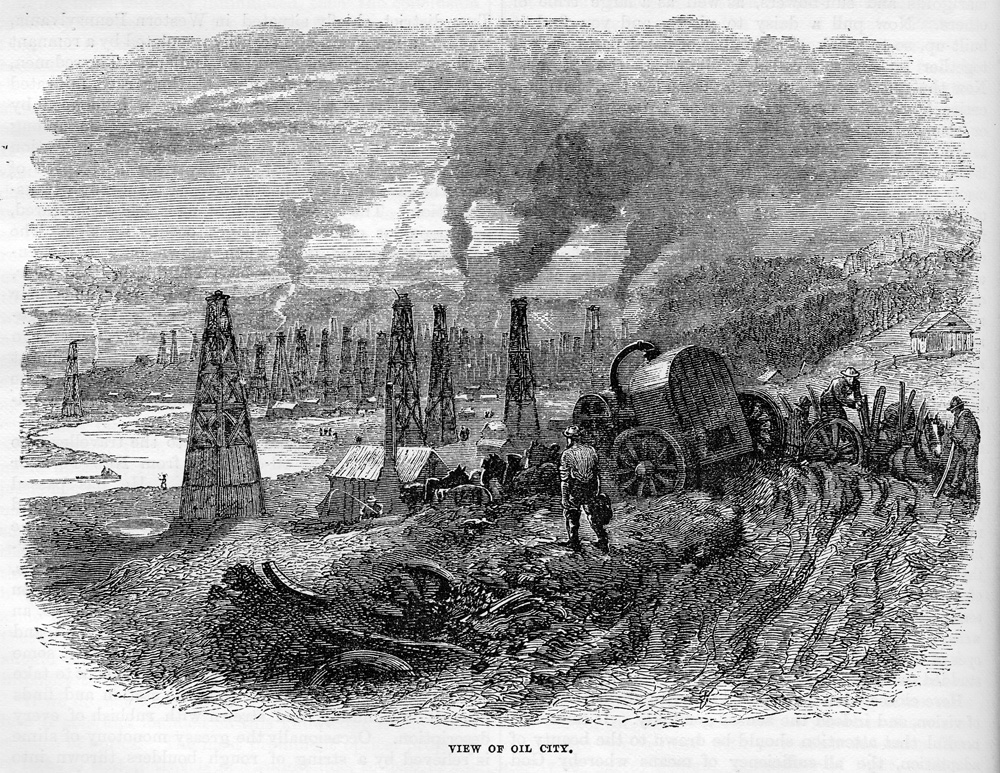 Oil City in Pennsylvania in 1864

One track to a new well was, he said, almost beyond description: ‘I saw a fair share of mud at Balaklava, but for varying depths, varying tenacities, varying colours, and universally nauseous odour, there is nothing to compare with the mud along this path’. The Times correspondent was none other than William Howard Russell who had witnessed the Battle of Balaclava a decade earlier and had become famous for his Crimean War reporting. A few years later, he had written about the early stages of the American Civil War and was now back in the United States for a few weeks, having travelled to New York across the Atlantic on the SS Great Eastern.

In spite of the squalor, fortunes were being made:

‘The whole population is ragged, muddy, and dirty; but the whole population is without an exception more or less thriving, and, as a general rule, more or less rich … the real Oil City is only one long, winding street on a mud flat between the river and the high, steep bluffs, and along this narrow strip [are] depôts, wharves, stores, hotels, eating saloons, whisky shops, and wells … Here is a whisky saloon, with men smoking and drinking, and next to it a pumping well, which fills the air with its inflammable gas.’

Smoking was banned, but terrible fires did occur: ‘It is true that at every hand’s turn one meets the warning notices, “No smoking,” “Beware of smoking,” “Smokers will be lynched,” &c. Yet … smoking does go on on the sly, when teamsters and others can slip into the brushwood and furtively light their pipes.’ Years later, in 1872, some 40 miles to the south, the Fanny Jane well struck a huge reserve of oil, and a town developed that was itself called Petrolia and where the gas was harnessed for lighting:

‘At night the “belt” [the Cross Belt oilfield] can be distinctly traced for miles by the hundreds of gas-lights which mark its outline … Petrolia utilizes the gas from the Fairview gas wells [a mile away]. It is supplied to many of the houses, and illuminates the streets.’

For a while, the region of Petrolia supplied four-fifths of all petroleum worldwide, but many of the wells dried up, and today the old oil boomtowns have much smaller populations or are ghost towns, truly of historic significance. Although the introduction of kerosene for lamps helped to save whales from extinction, nobody could have imagined the far-reaching consequences of the petroleum industry and the internal combustion engine.