The 2016 summer in Britain has been somewhat indifferent – very few scorching hot days, much cloud and below-average temperatures. Exactly two centuries ago, the weather was far worse. As Jane Austen died in July 1817, her very last full summer in 1816 was a wretched one, and she refers to the rain and the cold in a few of her surviving letters. ‘I begin to think it will never be fine again,’ she lamented in early July. On 1st September 1816 William Holland, the vicar of Over Stowey in Somerset, wrote in his diary: ‘The weather has continued in the same uncertain state that it has done for sometime past. Indeed properly speaking we have had no summer, for we scarce have been a week without [a] fire throughout, I have now this very day a fire in the parlour.’ For much of the year his diary had been a litany of bad weather and dashed hopes. In his rural community, he was keenly aware of the effects of the weather on the crops. The constant rain had delayed the hay harvest considerably, and two weeks earlier he had written: ‘Rainy, windy weather confined William [his son] & I within doors – nay we had a fire tho’ in the midst of August. What will become of the corn I know not, for it does not ripen.’

This exceptional weather was not confined to south-west England, but was felt right across the northern hemisphere. In late July the Scottish newspaper the Caledonian Mercury carried reports from Europe about the unseasonable conditions:

‘The foreign papers continue to inform us of the damage done by storms of hail and rain, by lightning and thunder, in almost every part of Europe. Whole districts have been ravaged and laid waste, houses have been blown down, the labours of the husbandman destroyed, rivers have burst their banks, and inundated vast tracks [tracts]. The greatest damage seems to have been done in Germany.’

After reporting on similar events in Scotland, the same newspaper published accounts taken from English newspapers:

‘A London paper of Saturday states, that in that city and neighbourhood it had rained “more or less for sixty successive days, mostly in the evenings – frequently all night, and very often in tremendously heavy but short showers.” The rivers in consequence were full to the margins, and the hay harvest was expected to be the latest that has happened for many years.’

On the other side of the Atlantic, the weather was just as bad, particularly in the north-eastern United States, and by September it was obvious from newspaper reports that it had been a disastrous year for farmers:

‘Bedford. [Massachusetts] Sept. 12. It has rained incessantly for several days and nights past. The Juniata [river] is now higher by nearly two feet, than it was the time of the great flood in the fall of 1810. It is a most pitiable sight to see cows, sheep, fowls, bridges, fences, oats, corn, pumpkins, grass &c. &c. floating down in one common mass. Persons owning lands contiguous to streams of water, and contractors employed in building the new turnpike bridges, have, we much fear, suffered severely.’

The Newport Mercury summed up the situation in the state of Rhode Island: ‘In the summer past, we have experienced a great variety of weather, and many surprising changes. Spring, Summer and Autumn seems to have been blended together. No month has passed without frost, nor one without snow.’

This devastating freak weather in the northern hemisphere in 1816 was largely due to climate change caused by volcanic activity in 1815, but bad weather had also been experienced just over three decades earlier, which may even have been a key factor that led to the French Revolution. For several months in 1783 and 1784, a massive eruption of fissures of the Laki or Grimsvötn volcanic system in Iceland emitted vast amounts of sulphur dioxide and changed the climate considerably in northern Europe and America that particular winter, and for many years to come. In 1812, 1813 and 1814, a series of volcanic eruptions took place across the globe, including La Soufrière in the Caribbean and Mount Awu in Indonesia, Suwanosejima in Japan and Mayon in the Philippines. Then came Tambora.

On Wednesday 5th April 1815, the volcano Tambora on the Indonesian island of Sumbawa erupted with a cataclysmic explosion. Despite the intensity of the initial eruption, Tambora continued to eject lesser amounts of lava and ash over the next four days, followed by a second, even larger explosion on 10th April. In the immediate area, about 12,000 people were killed by falling rocks, showers of ash and red-hot lava, as well as pyroclastic flows – rivers of lava flowing so fast that not even modern vehicles can outrun. 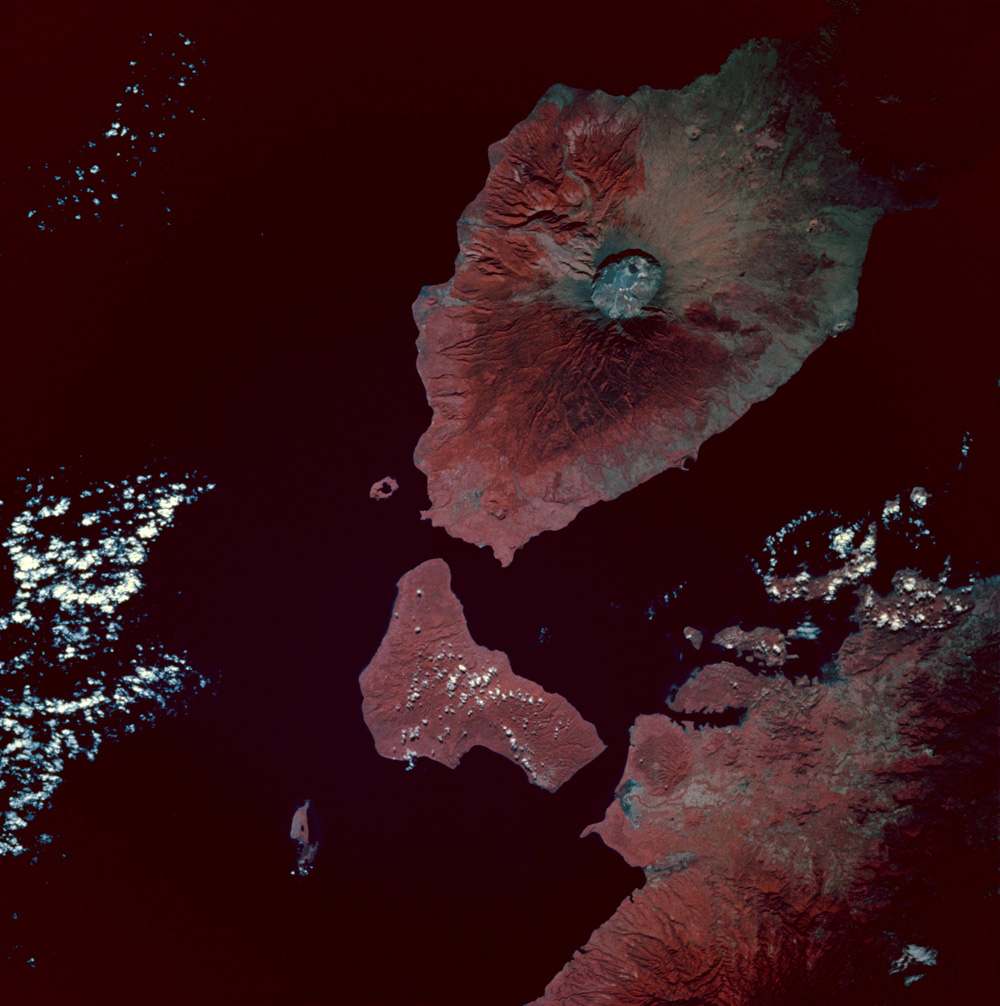 Image of the crater of Tambora taken from the Space Shuttle Endeavour in May 1992. Courtesy of NASA via Wikimedia Commons.

The loss of life on Sumbawa was just the beginning of the tragedy. The cloud of dust and ash was so thick that it blotted out the sun. As a witness in eastern Java recorded in May 1815, ‘From the 5th to the 18th of the last month the Sun was not distinctly perceived, and if his rays occasionally penetrated they appeared as observed through a thick mist.’ The blotting out of the sun in the surrounding area was hardly surprising since the Tambora eruption blew over 150 cubic kilometres [36 cubic miles] of material into the atmosphere – many times more than in the famous explosion of Krakatoa (also in Indonesia) in 1883. In fact, Tambora is the largest volcanic explosion in recorded history. The resulting cloud of debris, as well as the various gases released in the explosion, gradually thinned out and floated at the mercy of the currents in the atmosphere. It took a year for the cloud to drift to the northern hemisphere, and it gave rise to the appalling weather of 1816 and beyond.

Changes in climate continued for several years, and although the weather improved, the suffering of the people continued. It would be decades before the disastrous summer of 1816 would be scientifically explained, but it soon gathered names that passed into folklore. In America it was often called ‘Poverty Year’, ‘The Year There Was No Summer’ and ‘Eighteen Hundred and Froze to Death’, in Germany it was called ‘The Year of the Beggar’ and elsewhere in Europe, where famine and disease led to many riots, it was blamed on the wars that had just ended and so was called ‘Napoleonic Weather’. In Britain it was simply remembered as ‘The Year Without a Summer’.

One positive effect of the volcanic ash cloud was on those visual artists who took especial note of the weather in their work, the prime example being the artist J.M.W. Turner. The cloud of volcanic dust produced dazzling sunsets and strange smoky yellow skies, which he captured in many of his paintings.

To escape the weather in Britain, Lord Byron, Percy Bysshe Shelley, his wife Mary, her sister Claire Clairmont and Byron’s doctor John Polidori travelled to Switzerland. The Napoleonic Wars had finally come to an end the year before at the Battle of Waterloo, and so the Continent was once again open. The party stayed in a villa on the shore of Lake Geneva that Byron had rented for the summer, and he became so inspired by the gloom cast by the volcanic dust in the atmosphere that he wrote the poem Darkness. It begins:

‘I had a dream, which was not all a dream.

The bright sun was extinguish’d, and the stars

Did wander darkling in the eternal space,

Rayless, and pathless, and the icy earth

Swung blind and blackening in the moonless air’

It describes a world plunged into gloom and darkness, resulting in famine, disease, conflict and eventually widespread devastation. Although the connection between the weather and volcanic eruptions would not be proven for many decades, Byron curiously mentions volcanoes in the poem:

‘Happy were those who dwelt within the eye

Of the volcanos, and their mountain torch.’

Although they had escaped various problems in England, the travellers at the villa were unable to escape the weather. Being confined indoors for days on end, Byron challenged them to each write a ghost story. Although Byron and Shelley soon gave up on theirs, John Polidori started on The Vampyre, which became the first modern vampire story. Mary Shelley persisted and finished her story there. The result was her famous novel Frankenstein, published in 1818 in (as was customary) three volumes. 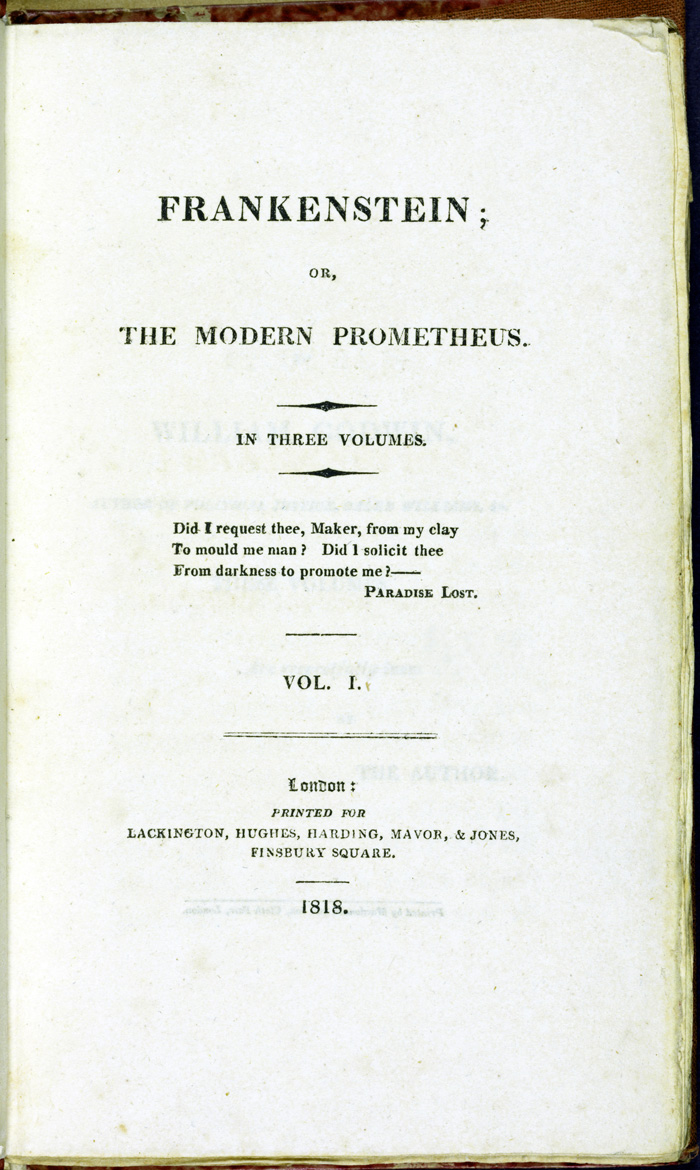 Title page of the first volume of ‘Frankenstein’

For most people, Tambora would wreck their lives as the change in climate caused havoc. A succession of greatly diminished harvests led to famine and food riots, particularly in Britain and France, and epidemics took hold more easily in populations that were weakened by starvation. In Ireland, the famine led directly to a typhus epidemic in which it is estimated that up to 100,000 people died. Across Europe the situation was less clear cut. Many deaths were recorded as being due to ‘fever’ or ‘famine fever’, which were catch-all terms that covered many unidentifiable diseases. Apart from the typhus epidemic, the overall picture was one of a general worsening of health across Europe, with endemic diseases taking advantage of a weakened population. Then came news of the plague.

Bubonic plague had appeared in India in 1812 and spread rapidly to Constantinople. It then invaded eastern Europe, and by 1816 western European countries were forced to set up drastic quarantine procedures covering all Mediterranean and Adriatic ports. These measures effectively stopped the epidemic in its tracks, and only a few cases broke out in Europe, which were quickly dealt with by isolation and by burning the houses of victims.

The cholera epidemic took Europe by surprise, largely because the disease was so little understood. It had been endemic in India for some time and was largely confined to that country, but the failed harvests of 1816 triggered an epidemic that was transmitted westwards by British military operations across the north-west frontier into Afghanistan and Nepal. In this initial phase, about 10,000 British troops and hundreds of thousands of Indians died. From Afghanistan it took fifteen years for cholera to work its way into Europe, finally reaching Britain in 1831. The following year, 1832, it crossed the Atlantic to America and Canada. In its slow march across Europe and America, cholera left hundreds of thousands, possibly millions, of people dead in its wake.