Found mainly in England, teasels (also spelled teazles) commonly grow on damp grassland, at the edges of fields and on waste ground. They are tall plants with prickly stems and leaves, reaching about 1.8 metres in height. It is difficult to believe that this strange-looking wildflower was once grown as a commercial crop, known as the ‘fuller’s teasel’. 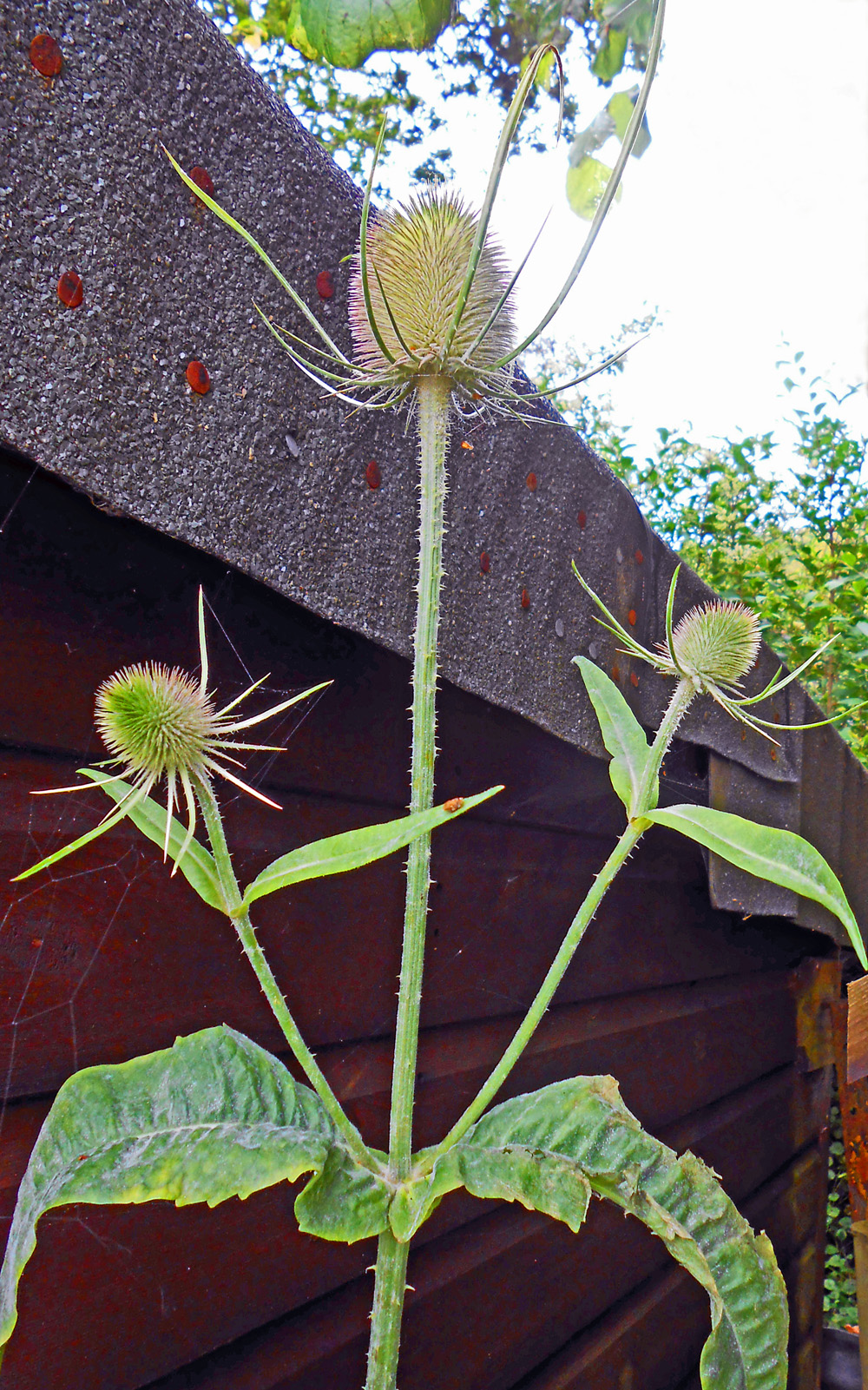 Picture of a wild teasel plant

Teasels were cultivated because they played an essential part in woollen cloth manufacture, as an article published in the Saturday Magazine in 1839 pointed out:

‘The value and importance of the teazle arise from the use which is made of its prickly flower-heads in our woollen manufacture, where it appears indeed to be absolutely indispensable, and not to be rivalled by any of the ingenious inventions which have been offered from time to time as a substitute for its use. Without any other preparation than that of a careful drying in the sun, the heads of this plant are better fitted than any other known material for raising the nap on cloth, removing knots and unevenness, without injury to its texture.’ 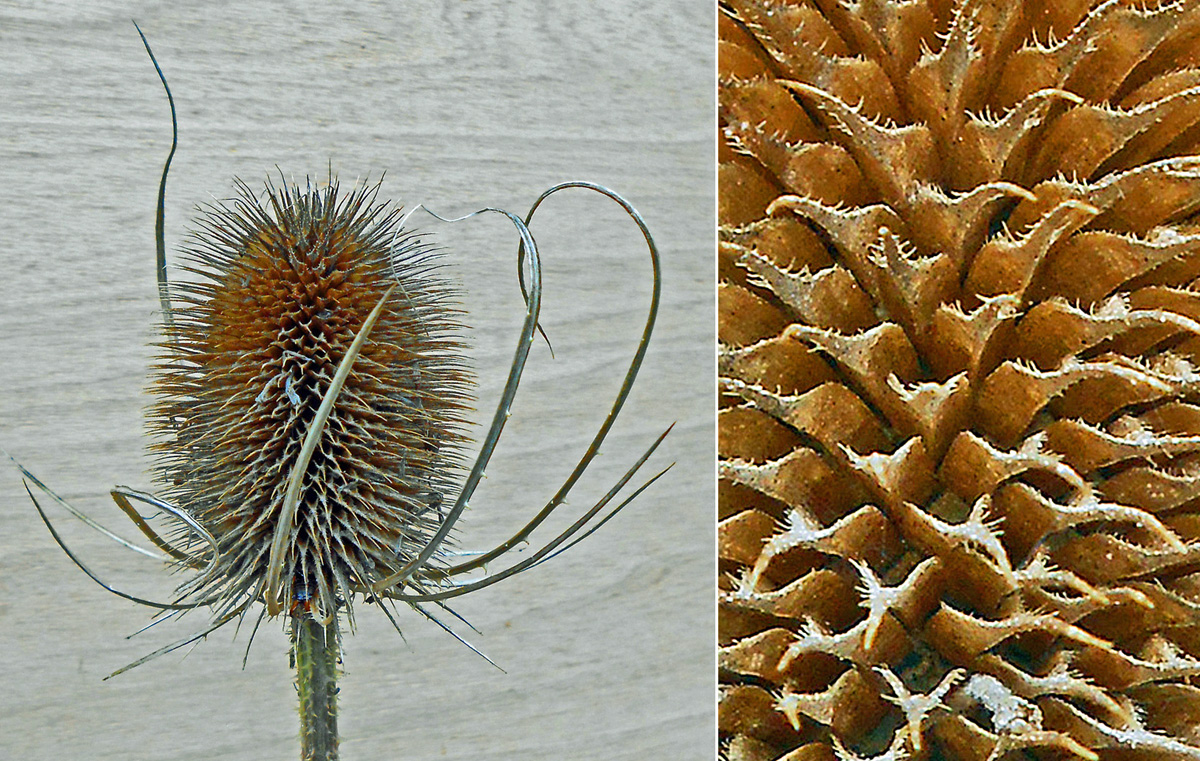 The article went on to explain why the teasel was important and why no substitute had been found:

‘The head of the teazle is composed of a great number of flowers, united together in a conical form, but separated from each other by a long chaffy substance, at the end of which is a fine hook, the part so valuable to the manufacturer. These hooks, while they are strong enough to overcome a slight impediment in their passage over the cloth, are yet sufficiently yielding to give way and break when they become fixed in a knot which they cannot disentangle: hence their superiority over metallic substances, which instead of yielding, must tear or deface the material.’

Teasels were used to ‘tease’ or brush the woven woollen cloth, so as to raise the surface fibres – the nap. The uneven raised nap was then cropped with shears to produce a fine, smooth surface. The process of raising was for centuries carried out on cloth draped over a frame by men using teasels set in a wooden frame:

‘In teazling by hand, a number of the prickly heads of the plant are arranged in a small wooden frame, having crossed handles eight or ten inches long; these frames have then somewhat the appearance of curry-combs, and are used by two men, who scrub the face of the cloth.’ 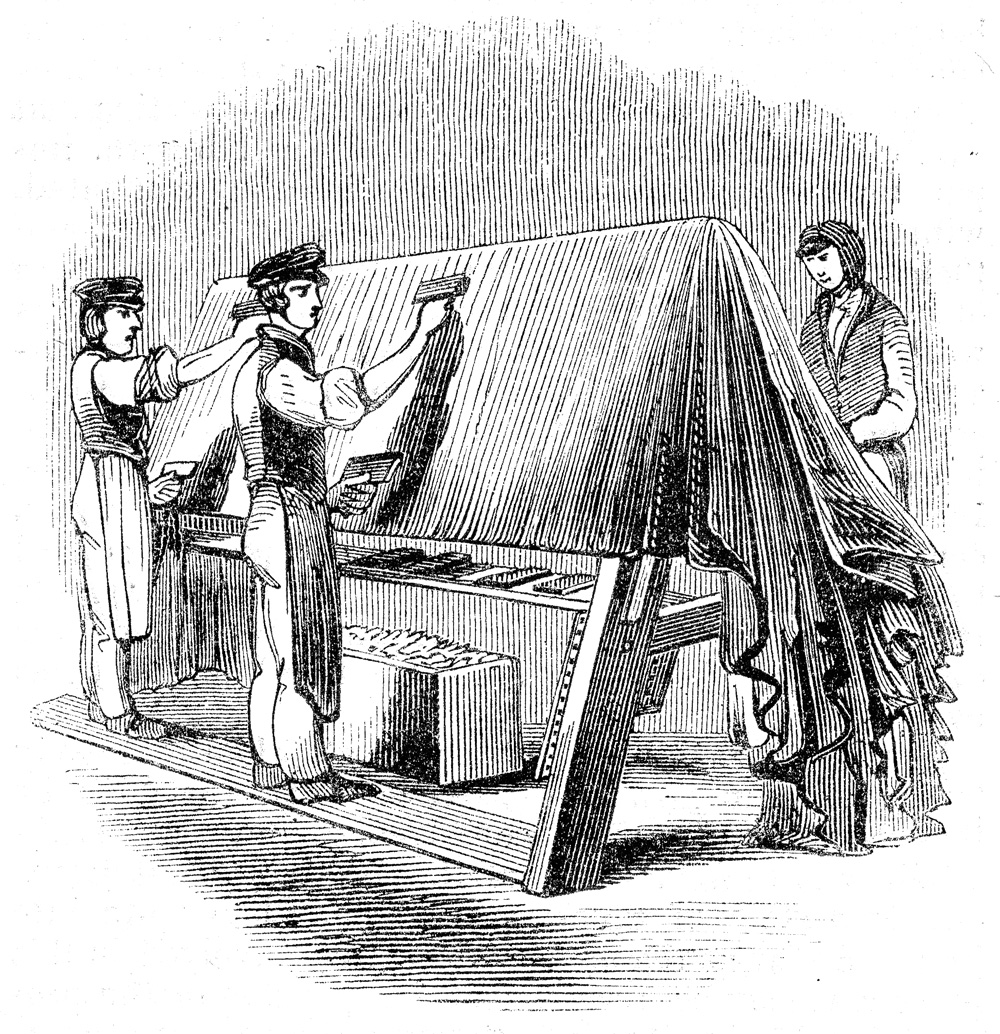 This laborious method of raising the nap was superseded by a machine called a gig mill, where the cloth was passed over revolving cylinders that were covered with teasel heads. The teasels needed to be replaced periodically, and the quantity used was huge since a single piece of cloth might use 1500–2000 teasels. The gig mills took the labour out of the actual process of raising the nap, though the teasel heads still needed to be replaced by hand:

‘They [the teasels] are brought to the factory in bundles, and are prepared for use by a man and a boy. The boy cuts off part of the stalks with a pair of scissors, and the man fixes the teazles into oblong iron frames, which frames are afterwards to be fitted to the surfaces of the cylinders.’ 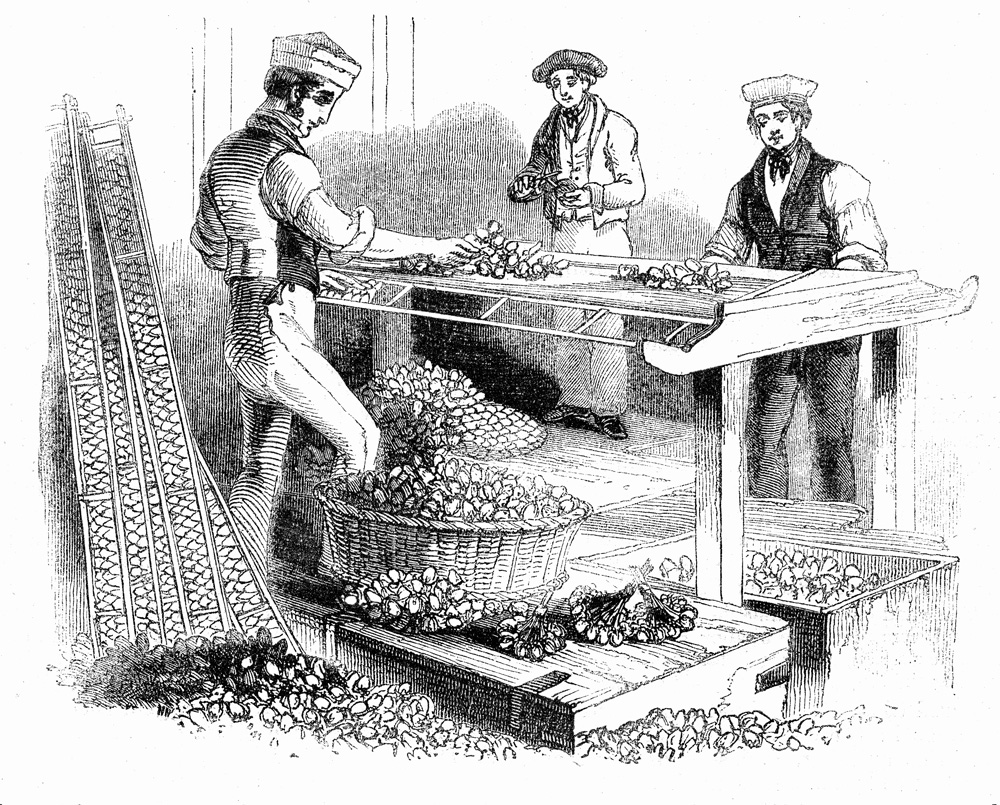 Fixing teasels in frames for a gig mill

The commercial cultivation of teasels in England continued well into the 20th century, when imported teasels became more common. Substitutes such as wire brushes have never supplanted teasels in the production of the finest woollen cloth, and teasels are still used in a few woollen mills in Britain. Fields of teasels were once a common sight, helping to make the landscape look very different in centuries past.