The canal was designed to link the Paddington section of the Grand Junction Canal, which had opened in 1801, with the River Thames at Limehouse. Unusually for a canal just over 8½ miles long, it had several tunnels, the longest of which was the Islington tunnel at just over ½ mile long. The print depicted below was published only 7 years after the Regent’s Canal opened and shows in the foreground what is now known as City Road Lock. The bridge in the middle distance is on the line of the present Danbury Street, and through the arch can be seen the eastern end of Islington Tunnel. The tunnel runs on an absolutely straight alignment for 969 yards (886 metres) and emerges by the Caledonian Road, not far from King’s Cross Railway station.

What is unusual is that this print depicts part of an urban canal on a working day rather than the more common picturesque, rural views of a distant canal. Many of the routine tasks that kept the canals working (and which are largely forgotten) are shown or suggested. The first thing to note is the smoke coming from the chimneys of the canal boats (or narrowboats) on the canal. This is not smoke from steam engines, as they were not fitted to canal boats until much later in the 19th century. At this time, canal boats were drawn by horses, which would continue to be used well into the 20th century. The smoke came from small stoves in the cramped cabin where the boatman and his family lived – the stoves were used for heating water and cooking and keeping everyone warm. 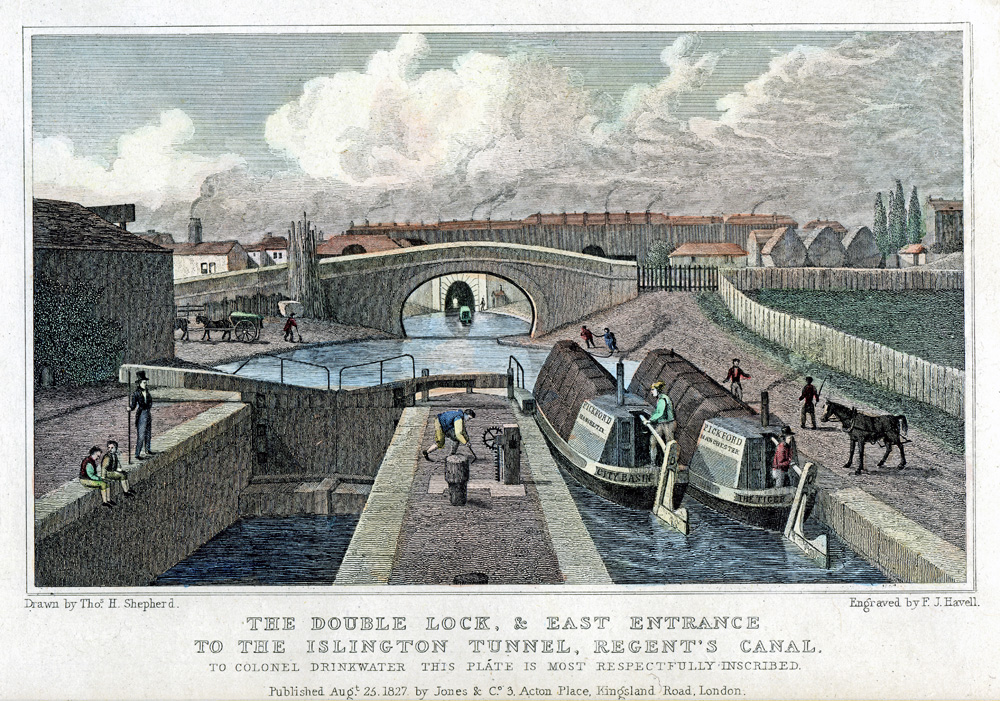 Print of the Regent’s Canal, published in 1827 and dedicated to John Drinkwater

The very term ‘towpath’ alongside a canal or river, often used today for walking and cycling, is a reminder that these paths were once specifically for horses. Naturally, they accumulated a great deal of manure, and on the left-hand towpath by the bridge, the print shows a man by a horse and cart who seems to be holding a shovel, perhaps collecting manure, which was  a valuable item that was sold to farmers outside London. A horse fitted with a draught harness is on the right-hand towpath, ready to pull a boat out of the lock when the water reaches the right level. There are two boats, but only one horse, implying that the horse belonged to the lock and pulled boats the short distance between the lock and the tunnel mouth.

There were no towpaths in tunnels, so the boats’ horses had to walk round to the other end of the tunnel. Without horses, narrowboats had to be navigated through tunnels by two men laying on their side on planks projecting from each side of the narrowboat, so that their feet touched the tunnel wall of the tunnel. They dragged the boat along by walking sideways, in a process called ‘legging the tunnel’. For the boatmen, this was an everyday task – one that was hard and awkward, conducted in a damp and airless atmosphere and mostly in darkness.

The magic of locks

As a piece of engineering, a canal lock is extremely simple, and yet the process by which boats can rise or fall between one water level and another appears quite magical and can be mesmerising to watch. Once a boat from the lower level was within a lock and the gates shut, sluices were opened to allow water to flow into the lock from the upper level. The water in the lock rose, along with the canal boat, until the water in the lock reached the higher level and the gates could be opened to release the boat into the higher stretch of the canal.

A boat entering the lock from the upper level was lowered by allowing water in the lock to flow out through sluices into the lower level. The emptying of a lock meant that water was lost from the upper level of the canal, which had to be replenished in canals. In the print, the winding gear for a sluice gate is shown on the island between the two locks.

Prints were often copies of paintings, but were sometimes created from specially prepared drawings. In both cases there was often a degree of ‘artistic licence’ in making an attractive picture. Trees, buildings and even hills might be moved or changed in shape to suit the composition, so prints are often only a rough guide to the appearance of a locality. On the other hand, details within the prints had to be accurate or the print would be dismissed as fantasy. It is in the details of prints that lurks the evidence of everyday life – it is just a question of looking for it.