In the late 13th century, relations between the cathedral and the city were especially bad. In what appears to have been a flawed election, John Pycot became dean of the cathedral, and so Peter Quinil, the bishop, tried to oust him. Pycot was an Exeter man whose supporters included the mayor, and they singled out Walter de Lechlade as their main opponent on the bishop’s side. As the precentor of the cathedral, Lechlade’s job was to organise the cathedral’s services, but on the night of 10th November 1283, he was murdered in the Cathedral Close.

John de Lechlade, a relative, brought a legal case against Pycot, the mayor and 19 others, laity and clergy, but the case dragged on until December 1285, when King Edward I and his court came to Exeter. The king’s judges conducted the trial in the king’s presence, and five laymen were found guilty, including the mayor. They were immediately executed, but the guilty clergymen were handed over to the bishop. He allowed Pycot to retire to a monastery after removing him as dean. The actual perpetrators of the murder probably evaded justice.

In January 1286, as soon as the trial was over, the king gave permission for a high wall to be built around the Close, with seven gateways that were to be shut at night to protect the clergy. The wall was built to fill the gaps between existing buildings, while any rear entrances that backed on to the Close had to be blocked. The main gate was Broadgate, on the direct route between the Guildhall and west front of the cathedral. This was (and still is) the main entrance to the Close for visiting royalty and other dignitaries, and the route for processions. With the gates shut at night, the Close became a secure enclosure, and this situation continued to the early 19th century. 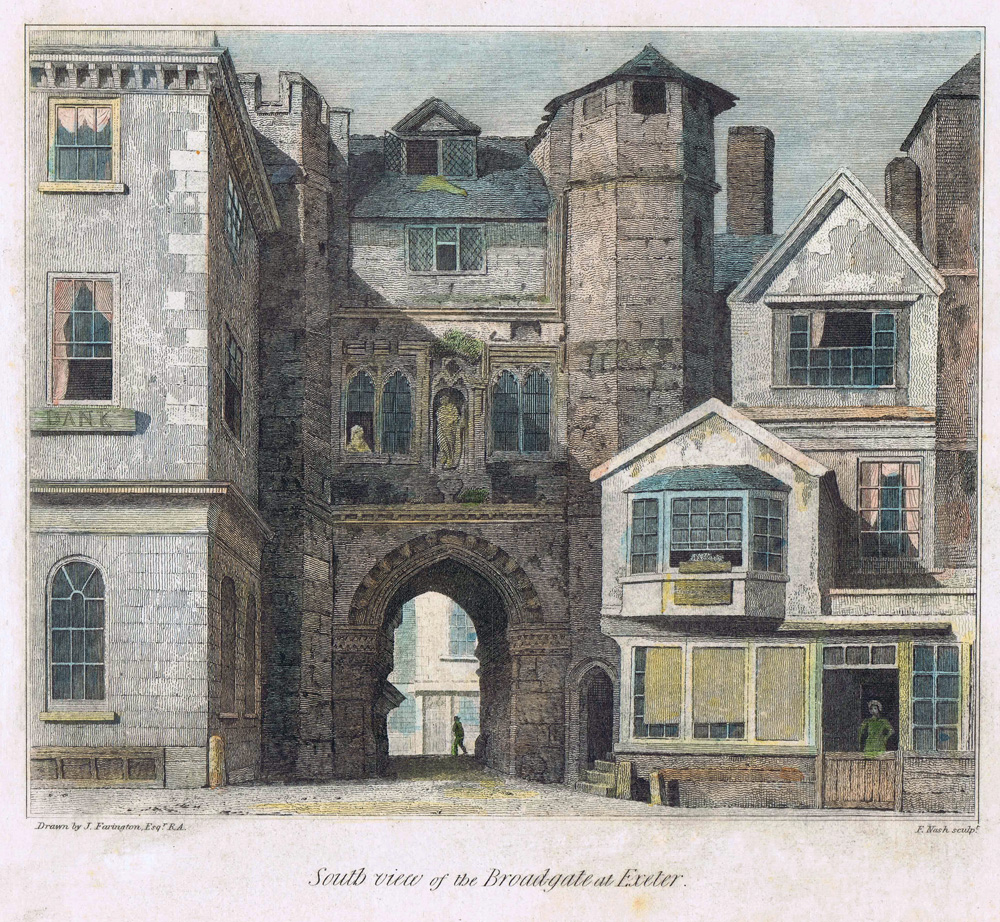 Broadgate, seen from the Close, a few years before its demolition in 1825

Some five centuries later, the gates of the Close were demolished, being too much of an obstruction. Broadgate was the last one to be taken down, in 1825, and in 1826 it was decided to mark each gateway with a pair of stone pillars. Because the Dean and Chapter of the cathedral still had the right to prevent traffic from entering the Close, each pillar had an iron ring, enabling a chain to be stretched across. It became traditional to close each thoroughfare on Midsummer’s Day, a custom that lasted until 1928. 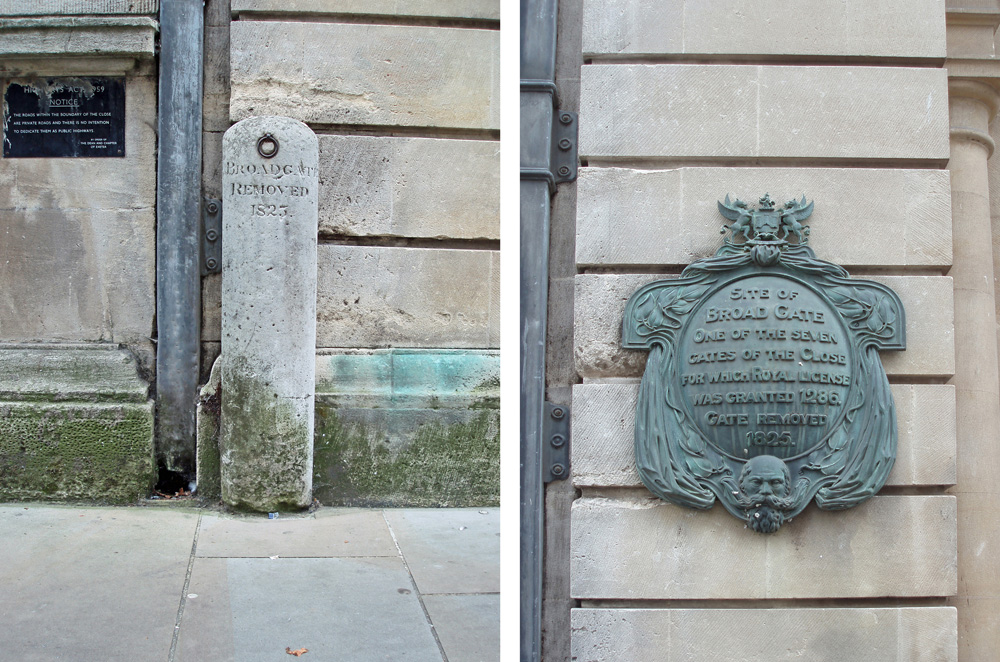 A stone pillar and plaque marking the site of Broadgate

The whole area has completely changed. Although the Close escaped Exeter’s bombing in World War Two, it did not escape subsequent redevelopment. There is no visible trace of the wall that protected the Close, and Broadgate is now a pedestrianised way between shops. The cemetery in front of the cathedral has been cleared, and the area is used as a small green park by the people of Exeter, as well as for a Christmas market and similar functions. Beneath the green is a Roman bath-house, but that’s another story. 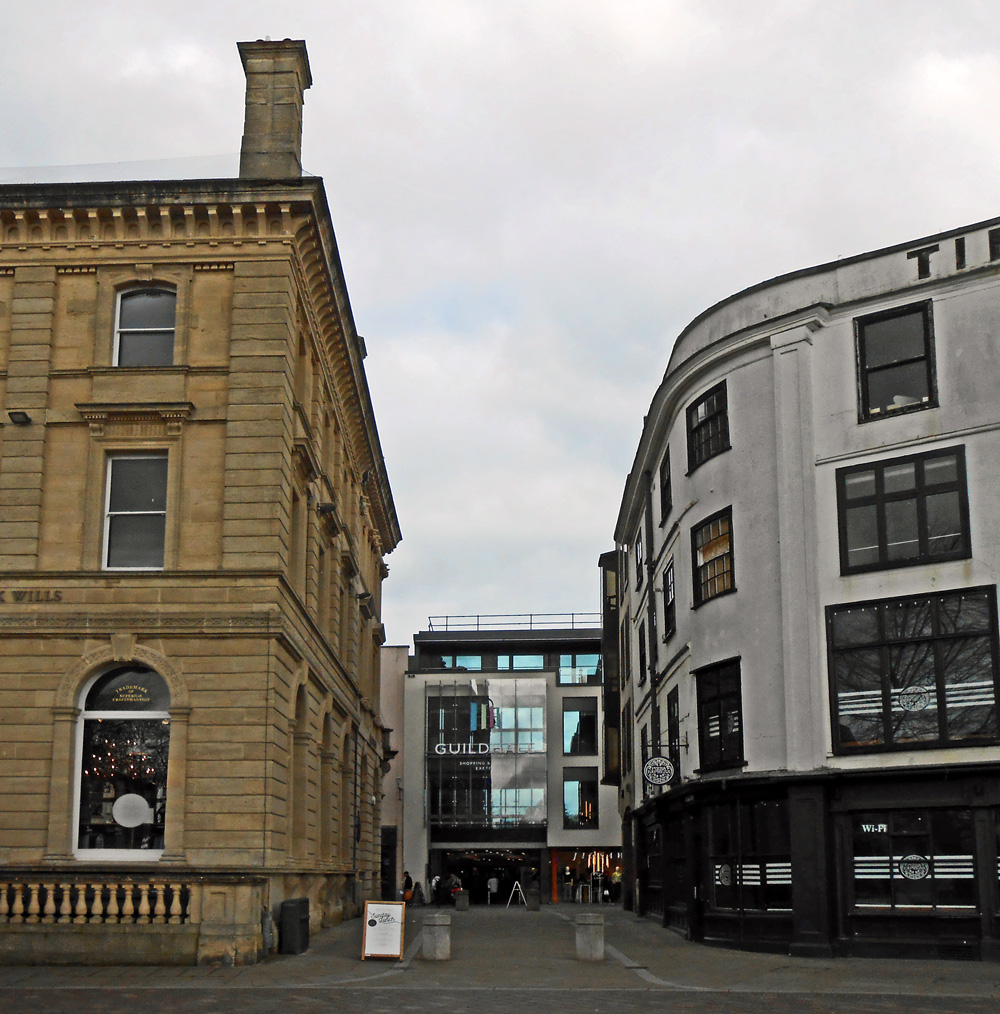