When you next post a letter, take a look at the letter box (or post box). We’ve recently been in Gibraltar, where they are instantly recognisable to visitors from Britain, being of cast iron, painted red and bearing a royal cipher. British letter boxes are so traditional that they are commonly depicted on Christmas cards, adorned with seasonal snow and a festive robin or two.

From Victorian times, letter boxes or post boxes were set up in streets and lanes for posting mail, and they comprise secure freestanding pillar boxes, wall boxes and lamp boxes. A pillar box is shaped like a short pillar, while smaller wall boxes are set in walls, with just the front face showing. Pillar boxes in particular were exported to British Overseas Territories like Gibraltar. Small lamp boxes were first introduced in London in 1896, fixed to lamp posts. Today, they are mainly located in rural areas in Britain, attached to posts, such as wooden telegraph poles, as well as embedded in walls. Ideal for smaller quantities of mail, this type of letter box was once a familiar sight in the countryside, but their numbers are diminishing, and they are rarely found in urban areas.

The Letter Box Study Group has a website. See also our newsletter 15 on the Carron Company and letter boxes, as well as newsletter 33 on posting letters in Jane Austen’s time.

Before 1857, mail to Gibraltar was brought by a monthly packet ship service that sailed from Falmouth in Cornwall. There was also an overland postal service run by a separate agency, and so Gibraltar had two post offices. In January 1857 the two services combined to form the Gibraltar Post Office, under the control of the Postmaster General in London. Mail had to be collected from the Post Office in Gibraltar, though local delivery was introduced from October 1858. In 2005 the Gibraltar Post Office was granted the title of ‘Royal’ by Queen Elizabeth II, the only overseas territory to be honoured in this way. 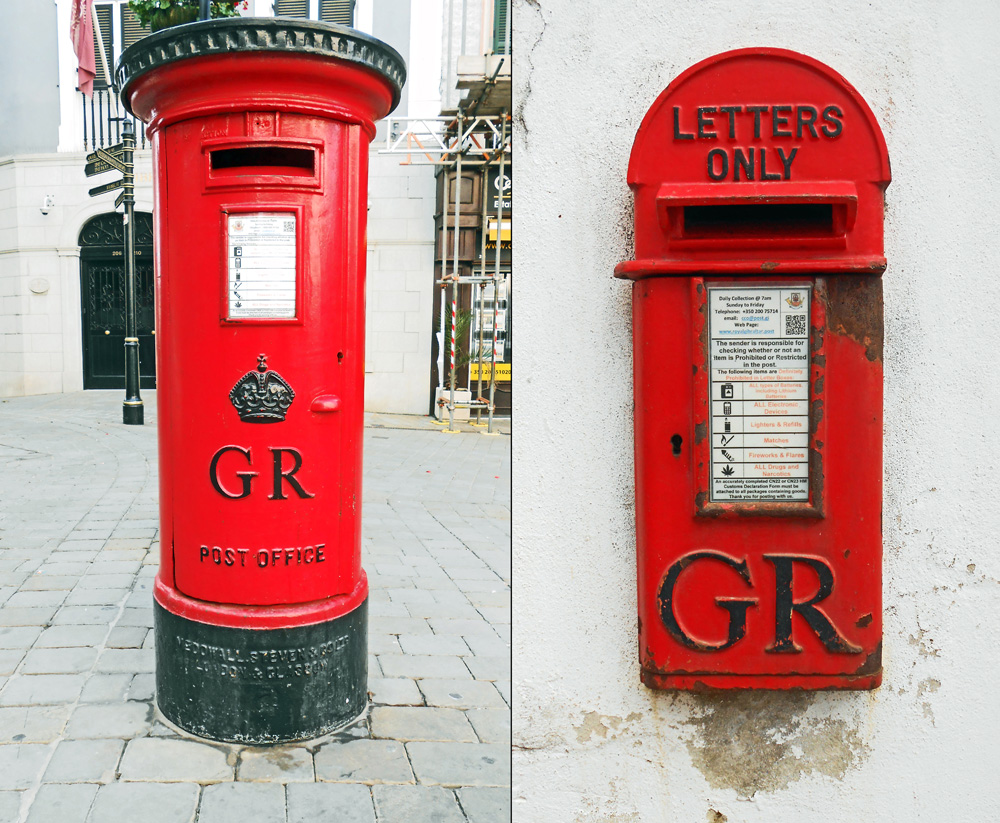 set in a wall in Gibraltar. The ‘V’ (for 5th) is not shown on either box

The Royal Gibraltar Post Office has acquired and brought together some historic examples of pillar boxes, sited in or very close to Main Street, making this a unique collection – one from the reign of every British monarch since their introduction in Victorian times. They differ from those in Britain by having their tops painted black. The boxes date to the reigns of Queen Victoria (1837–1901), King Edward VII (1901–10), George V (1910–36), Edward VIII (1936), George VI (1936–52) and the present Queen Elizabeth II (1952–). Other examples of historic letter boxes on Gibraltar include a rare George V lamp box. This collection helps to give Gibraltar a nostalgic feel for many British visitors.