In Sussex in the closing years of the 19th century it was customary for children to carry round an effigy of Guy Fawkes chanting the rhyme:

As late as the 1960s, the same chant was still being used in Berkshire and elsewhere. School half-term once coincided with ‘Guy Fawkes Night’ or ‘Bonfire Night’ on 5th November, and children spent their holiday making an effigy of Guy Fawkes, dressed in old clothes, which was paraded round the streets, while passers-by were accosted with ‘Penny for the Guy?’. The money that was collected was spent on fireworks and the ‘guy’ was burned on a bonfire, accompanied by fireworks, but concerns about accidents have killed off the custom. 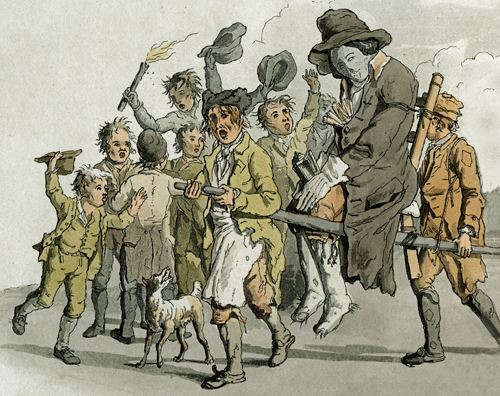 The rituals around Guy Fawkes Night each year on 5th November are among the few traditions that have a known origin, starting as a commemoration of the failure by the Catholic Guy (or Guido) Fawkes to blow up King James I and Parliament in London on 5th November 1605. Guy Fawkes was caught the night before with the gunpowder in the cellars beneath Parliament. Under torture he revealed the names of his Gunpowder Plot accomplices and was sentenced to be hanged, drawn and quartered. Parliament decreed that special thanksgiving church services should be held each year on 5th November, along with bonfires and the ringing of church bells – traditional forms of celebrating.

In many places the new custom seems to have been slow to take hold, but was then enthusiastically adopted. Initially, no effigies were burned on the bonfires, and for some years folklorists thought that the tradition of bonfires had actually been transferred from Halloween on 31st October to Bonfire Night. This may have some truth in areas defined as ‘Celtic’, but in England there is very little evidence for Halloween bonfires.

Although Bonfire Night was initially an anti-Catholic celebration, it was soon subverted for other purposes and often led to unrest. In the early 19th century much of the English countryside was in turmoil because of the desperate poverty of agricultural workers. Threshing machines were targets because they were regarded as symbols of oppression, taking work from agricultural labourers in the winter when they desperately needed the money, but ricks, farms and even workhouses were also burned down. The men claimed to be under the command of a fictitious ‘Captain Swing’, and in 1830 and 1831 the ‘Swing Riots’ spread from Kent across southern Britain and into the Midlands before being ruthlessly suppressed. Even so, in Dorchester in Dorset on 5th November 1831, the diarist Mary Frampton feared that Bonfire Night would erupt in more violence:

‘Various rumours spread of intended mischief on this night, but all passed quietly … The only difference was that no stuffed Guy Fawkes were brought to our door, as was the common custom of the day, and that the fireworks were more prolonged, lasting from dark until near midnight. Apprehensions had been entertained of riots, and the guard at the gaol was increased, and a day or two previously special constables had been sworn in and organized for the town, ready to be called upon if required … all, however, passed off quietly.’

Although Bonfire Night is unlikely to have any roots in Halloween, after four centuries it is now being eclipsed by Halloween. Health and safety concerns have meant that families rarely hold their own events on 5th November. Instead, bonfires and firework displays have become closely controlled commercial events, quite often on the nearest weekend, not even on the 5th. In a few places it still continues in a traditional form, as at Ottery St Mary in Devon where blazing tar barrels are the focus of the celebrations, while Lewes in East Sussex has the biggest bonfire celebrations in Britain, including torchlit processions with effigies of current figures of hatred.

Bonfire Night was once the sole day of the year when fireworks were seen in Britain, but firework displays are now commonplace at mass celebrations such as New Year and for personal celebrations such as birthdays. The significance of fireworks has been lost, and instead Halloween has become a bigger event, with traditions imported from America, such as ‘trick or treat’. Supermarkets in Britain get into a frenzy over Halloween, desperate to sell all things ghoulish. And a final note – it was once traditional for the shops to wait until 5th November had passed before filling their shelves with Christmas goods, but this year we have spotted Christmas cards and other gifts on sale at the beginning of September!