In these times of sensitivity to the environment, a glass bottle washed up on the beach with a piece of paper inside is quite likely to be dumped in the nearest bin as rubbish, but it was not always so. In the 19th century such occurrences were newsworthy, and in October 1821 a report of such a bottle in a French newspaper was also published in British ones. The Graham Moore was a brig, and James Lash was her captain:

‘On the 15th ult. on the coast of St. Jean de Mont [about 60 miles north of La Rochelle], arrondissemont of Sables d’Olonne, department of La Vendée, was found a sealed bottle, containing a paper, stating, that it had been thrown from his Britannic Majesty’s ship the Graham Moore, on the 6th of July last, lat. 47d. 47m. N. long. 7d. 51m. W. Mr James Lash, an officer of the English navy, who had signed the paper, stated his intention to be to discover the direction of the currents in the Bay of Biscay.– Journal de Paris.’

In the 18th century mariners had been especially concerned with finding a reliable way of establishing the longitude of a ship at sea, but in Britain this was eclipsed by the wars with the French. Once the conflict ended in1815, there was a renewed concentration on navigation. With improvements in the accuracy of clocks and watches, longitude was less of an issue, but ocean currents – as important for sailing ships as the prevailing winds – became a focus of attention instead.

A very simple method of studying currents was to place a message in a glass bottle, giving the date and position when it was thrown into the sea, and hope that it would remain waterproof, that it would not be smashed to pieces and that someone would pick it up from the sea shore and pass on the message. Finds of such ‘bottle papers’ did begin to be reported and studied, and in 1833 the newly established Nautical Magazine published several analyses, including one bottle paper from the West Indies:

‘A bottle paper, of which the following is a copy, has been sent home by Colonel Cockburn, Governor of Belize, H.M.S. Chanticleer, 23rd February, 1831. In lat. 15o 28′ 59″ N. long. 76 o 2′ 45″ W. At noon this paper was thrown overboard, with a view of ascertaining the current at this season of the year, between the coast of Columbia and the island of Jamaica, the ship having left Porto Bello ten days, leaving the bay of Santa Martha on Monday, 21st February, at 6 p.m. We find … that it was picked up afterwards on the 20th April, at about forty leagues from the bay of Ascension, on the coast of Yucatan.’

From these basic facts it was possible to build up a picture of the prevailing current:

‘The absolute course and distance between the above situations, is about N. 70 W. (true,) six hundred miles; and the elapsed time between the two dates allows it to have been set about ten miles and a half per day, by a superficial current in that direction. It must, however, have been influenced in its course by various circumstances, and, allowing it to have drifted a hundred miles further, by taking the contour of the coast into consideration, it might have travelled about twelve miles a day, or half a mile per hour, to the westward.’

The use of messages in bottles became so well established that in 1854 Charles Dickens included a lengthy article in his magazine Household Words, which began:

‘There is a mode of bottling up information until wanted, which occasionally perplexes those who are not behind the scenes and do not see why and wherefore the thing is done. It was about half a century ago that this “bottle department” was established; we are not without examples of its previous use, but it then became a definite system. A captain of a ship tells his whereabout; he writes on a piece of paper or parchment; he encloses this in an empty bottle; he seals this bottle, and casts it into the sea; he leaves it to the mercy of the winds and waves; and he believes that, at some time and in some place, it will be picked up, and the contents opened and read.’

Captain Becher, the editor of the Nautical Magazine, had published a chart based on the information from bottle papers, and in 1852 he drew up a second enlarged chart, which provided new information about ocean currents. It also sparked a great deal of discussion about the accuracy of the method.

Not all messages in bottles were scientific experiments, as the Household Words made clear:

‘Some of the papers in the bottles contain short but affecting narratives; the ship is stranded or water-logged; the crew can hardly reckon on another hour of life with any probability; and their captain pens a few words, in the hope that friends at home may perchance learn thereby the probable fate of the hapless ship. Many instances have occurred within the last few years, in which a bottle has been the only messenger of correct information; a vessel has been so long unheard of, that a disastrous fate seems to have been certain; but this fate is not known until a floating bottle brings news of the crew, down to nearly the last hour of their existence.’

A message of this sort was written by Major Duncan McGregor on board the Kent, bound for Calcutta, when the vessel caught fire in bad weather in the Bay of Biscay on 1st March 1825. The message read: ‘The ship the Kent Indiaman is on fire – Elizabeth, Joanna & myself commit our spirits into the hands of our blessed Redeemer his grace enables us to be quite composed in the awful prospect of entering eternity D McGregor … March 1825 Bay of Biscay.’ 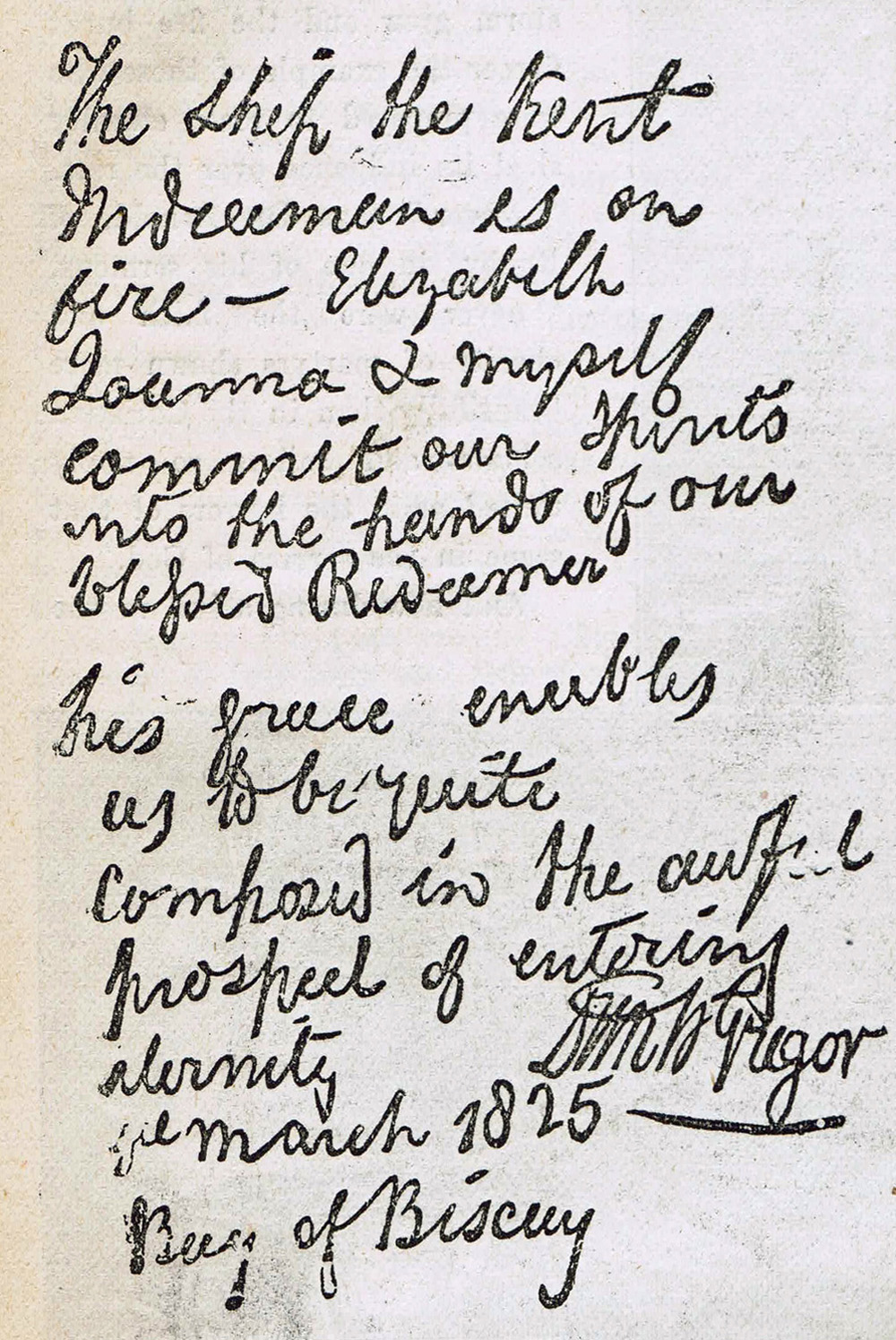 Facsimile of the message written by Major McGregor

McGregor sealed the message in a bottle, but fortunately another ship came to the rescue before the Kent blew up. Of 641 people on board, 560 were taken off safely, including Major McGregor and the women mentioned in the message. The bottle with the message had been left in his cabin and survived the explosion. Approximately 19 months later, it was found on a beach on Barbados.

Bottles come in from the cold

Bottles were also useful for messages from explorers. Without even a radio, explorers were cut off for months or even years, so the time taken for a bottle to reach civilization was the fastest communication available, as the Household Words article pointed out:

‘The bottle-papers have given us more information concerning the progress of the many recent Arctic expeditions than would be supposed by persons who have only glanced cursorily at the matter. Captain Bird threw overboard a cask containing papers, when on board the Investigator in eighteen hundred and forty-eight. It was picked up by the Prince of Wales, Hull whaler, and afforded to the Admiralty evidence of the position of the Enterprise and Investigator on a particular day. From the same ship, but when under the command of Captain M’Clure … a bottle was thrown out while she was voyaging down the Atlantic towards the Behring’s Strait route, in February eighteen hundred and fifty. The bottle floated three thousand six hundred miles, in two hundred and six days.’

From literature to litter

Towards the end of the 19th century the study of oceans, including their currents, became more scientific, with expeditions set up specifically for that purpose, and during the 20th century, with the benefit of much more efficient communications and mapping instruments, oceanography became a distinct science. Now the serious role of messages in bottles has long been superseded and forgotten, and bottles washed up on the beach are just regarded as rubbish to be disposed of.